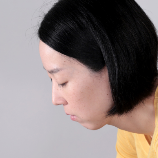 Min Oh’s video works combine objet sculpture, performance and music. She controls the situation through a series of regulations, and the subjects in her video works maintain their relationship with each other and their tension through controlled movement. In Oh’s work, new system is formed through the repetition of a simple structure, and the new situation created through this system reaches balance and completes the narrative.

The jury for the Fine Art category of the 6th Doosan Artist Award in 2015 consisted of three members including Sungwon Kim, Geun-jun Lim and Sun-ryung Cho. The 9 final candidates for screening were artists of different ages and various styles of artmaking, from Korean painting, to drawing, Western painting, video, animation, installation and project-based works. While all the artists demonstrated astounding talent and thus made the evaluation process difficult, the three finalists Jungsuck Kang, Min Oh, and Mok-Yon Yoo were chosen for their thriving art practices of great diversity and depth, and their ability to cast a contemporary outlook on Korean contemporary art.

Born in 1984, 1975 and 1978 respectively, Kang, Oh and Yoo were relatively a little older than the three finalists of last year, Jungju An (1979), Yunsung Lee (1985), and Dongju Kang (1988). However, age was not taken as a particular consideration as long as it remained in the pre-requisite range, because some artists demonstrate their artistic talent relatively late in their life while some have a mature practice at an early age.

With 2 solo exhibitions and participation in numerous sensational special exhibitions, Kang was highly praised as a leader of new trends in Korean contemporary art with his active involvement in youth art collectives and new alternative spaces. He was commended for being “one of the most problematic figures in the ‘generational gap changes’ taking over the art world in Seoul in 2015” and an artist who “interprets the everyday life of the lethargic youth generation, captured from the perspective of the all-pervading smart phone, as a schizophrenic tendency.” Kang was also applauded for his work which “demonstrates an attitude to reject the phenomenon of generation itself by affirming the state of alienation.”

Min Oh majored in music, studied in US, and works in Europe. Although relatively less known in Korea, her last few exhibitions have demonstrated her exquisite sense of rhythm and understanding of her medium. In Oh’s work, “the elaborate integration of concise gesture, repetitive pattern, minimal expression and subtle sound produces works that are both like a sacred ritual and a light play”. Oh was highly regarded for her “works in which the visual mechanisms call forth the aural element..., and the aural visual mechanisms and information are controlled to create an experience of acoustic image and movement.”

An artist highly-engaged in project-based works, Mok-Yon Yoo was commended for his unique oeuvre with a wide range of involvements. Yoo works from “a slightly different perspective from the objective of ‘communication between people’ often directed at in audience-participatory works”. He is an artist who “strives to construct a new point of meeting between the structure of system and particular experience of the individual.” The jury also noted that Yoo “has an outstanding talent in visualizing his concept and working with various materials, and above all, has an open attitude which doesn’t suggest predictable conclusions.”

Also brought up in the evaluation process was that the previous awardees really took off in their artistic careers upon receiving the Doosan Artist Award, and that this demonstrates the status and prestige of the award. Doosan Artist Award will hopefully continue to inspire Korean artists in their art practice through its long term support.