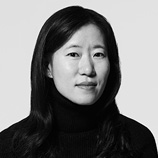 There is something consistently crude and awkward about the characters in Mi Hyun Yun’s plays. They lead their lives as they please, without cleaning up after their own mess. They enjoy their meals, ramble on while drunk, and fall fast asleep at night, and cackle even in extremely sad, painful, or serious situations. They never learn from their mistakes, simply living their lives just as they are. A middle-aged son sits hunched in front of a TV all day, watching provocative shows. He says things like “Ah, but reality is even more messed up,” and “If I got that kind of treatment after working my ass off for 10 years, I’d set that company on fire.” His elderly mother demands money from him, as she has spent her whole life sacrificing herself for his sake. When he tells that he does not have any money and that the family can barely get by as it is, the old woman begins to carry out the household goods in a basket to sell on the streets. At first, she sells anything she can manage to take, including cooking oil, instant coffee, and creamer. Eventually, the old woman commissions a moving company to sell out the entire house and simply leaves with just her basket (There She Goes Again With the Basket on Her Head, 2017). The man in pajamas is completely irresponsible as the breadwinner of the household. Mangmyeong’s older brother sets out with a suitcase, saying that he will go overseas, but he merely wanders around the house. Mangmeyong and his stepmother keep exfoliating each other until they start to bleed. The starving kid’s parents take their child to an old apartment built in the 1970s, where the old residents are going around with safety helmets on their heads and mallets in their hands to shatter kimchi pots, saying that they must lighten the load of their belongings to prevent the apartment from collapsing even more (Granny from Granny Flower Bar Said She’ll Give Me Melon Seeds, 2017). None of these characters seem to make sense, while the situations they are placed in are even more eerie and uncanny.
Yun’s writing is also rather loosely knit as she creates such awkward characters and the world they live in. Her dialogs are far too short for the characters to fully shed insight on their inner selves. Even such short lines are further spread out through many gaps and commas. Yun does not attempt to fill such gaps or refine her sentences in an effort to deliver her ideas lucidly; rather, she just lets them be. Yun takes her eyes off the script and gazes upon the stage instead, as if she is saying that she has done all she can, leaving the rest to the cast and director.
Such an approach by Yun breaks down the preconception on playwrights and scripts that long dominated the Korean theater scene. Yun’s plays deviate starkly from the notion that plays and playwrights should provide a refined answer sheet to the questions in life and about the stage. As such, her plays feel unfamiliar, therefore uncomfortable, and therefore new.
Yun is perfectly aware of the fact that the cast and the audience are what make her plays complete. As such, she leaves room for the languages of the director, actors, and audience to clash with her own language in the plays. The awkwardness, looseness, and gaps throughout her scripts are therefore deliberately planned for this very purpose, and therefore result in unique consequences. Most of all, the cast must continue to question how they would fill the gaps, and if filling such gaps is meaningless, how they should lay such gaps to bare on stage. In this regard, Yoon’s plays are extremely theatrical.
Yun’s plays are therefore not the answer sheet, but more like a fill-in-the-blank quiz instead. As we seek for answers that would best fill in the blanks, we come to face our true selves. We come to realize how we gave up (or had others take away) our ability to imagine something beyond reality, even when reality is more tragic and enraging than ever. Such is the style of “realism” employed by Yoon.
Amidst the trend in the Korean theater scene wherein plays grow increasingly image-centric without offering many implications or flamboyantly theatrical, Yun finds her own way to energize the plot and dialog. Her writing remains within the scope of a play while also going beyond the borderlines, straddling the fine line of representational and non-representational writing to realistically capture the state of the contemporary world without compromise. Through her work, Yun offers a sincere reflection on life. The only unfortunate aspect would be that Yun’s style has yet to be fully manifested on stage. Hopefully directors and actors capable of responding to the reverberations of Yun’s plays will soon step up. The board hereby selects Mi Hyun Yun as the winner without hesitation, in hopes that the young, valued playwright can boundlessly expand her talent and practice.